The level of income equality in this country has been in a reversing trend since Ronald Reagan’s presidency.  However, many people will not know this by listening to Fox news, or some other radical right-wing talk show host, including Glenn Beck, who had this to say on his blog.

This is Glenn Beck’s attempt to create further division among us by perpetuating the latest right-wing “frame”, which states that 47% of Americans pay no income taxes.  This of course, is another Orwellian frame designed to convince all of us to take out our anger and frustration on the poorest and most disabled among us.  After all, these are the people who make up the 47% Glenn Beck is referring to.

Instead of looking up at the upper class who are truly responsible for our economic hardship, this frame ensures we look down at the very victims of income inequality, and ignore the fact that we are currently experiencing the largest transfer of wealth in the history of this country from the working poor and middle class (all of “us”) to a select few in the upper class (“them”).

David Cay Johnston does a beautiful job of summing up what is really happening in this country, being led by those in the upper class, or the top .1%.

Although each of the 9 things David Cay Johnston discusses are enlightening, I would like to focus on #5, which states, “And (surprise!) since Reagan, only the wealthy have gained significant income”  This disheartening reality ties into what the Occupy Wall Street movement is all about, and why it is critical to understand there is a class war being waged against all of “us” (99%) by a select few of “them” (top .1%)

Now, why do I say the top .1% instead of the top 1%?  Well, this chart from the Economic Policy Institute says it all!

Between 1979 and 2005, households at the bottom fifth of the income scale have seen an average, inflation-adjusted income growth of just $200. Importantly, that does not represent an average annual increase in income of $200, but rather, an increase of $200 over the entire 26-year period. By contrast, a small number of households at the top 0.1% of the income scale saw average income growth of almost $6 million over that same period

Why is this important? Well, because the 26 year period prior to 1979 paints an entirely different picture. 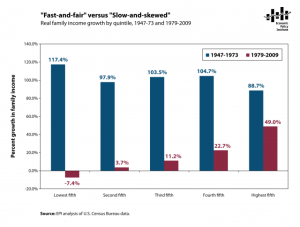 “These latest patterns of extremely uneven income growth stand in stark contrast to the period between 1947 and 1973, when income growth was distributed roughly equally across income classes, with the poorest 20% of families seeing income growth at least as fast as the richest 20%.”

So, what does this mean to the average citizen?  Why should anyone care about the income inequality that is illustrated in this article, or by what David Cay Johnston has to say?

Here’s why –  Prior to the current trend that has taken place ever since Ronald Reagan took office, a significant portion of our citizens (1 in 3) held a high paying union job.  Everyone was doing well, including those at the very bottom.  During this time period, those in the bottom 20%, in terms of income distribution, saw their incomes grow at a pace equal to those in the top 20%.  As a result, 1 parent could work and earn enough to support the entire family.  People could afford to purchase a home, save for their children’s college fund, and retire with the comfort of knowing they were secure in their old age due to the pensions they were receiving.

Of equal importance, there was less poverty, crime, alcohol and drug abuse, imprisonment, obesity, teenage pregnancies, etc.  Why?  Because the more equal the distribution of income is in a society, the less social-ills seen in that society.  (See the about section of this blog).  Notice there is no Occupy Sweden movement taking place.

As a result of the increasing income inequality trend that has taken place over the past 30 years, our political system continues to favor the top .1% at the expense of the rest of us, not only in terms of our wages, benefits and pensions, but also in terms of the social-ills mentioned above.

The only chance we have to reverse this devastating trend is if the Occupy Wall Street movement is successful, and we go back to a time when all segments of the population grow at an equal rate.  After all, an equal distribution of income is what enabled the creation of the ‘middle class’, which is now being systematically destroyed.

One thought on “The consequences of not having an equal distribution of wealth in the U.S., and what the Occupy Wall Street movement can do about it.”